Amour De Soi is in Our Bones

To the Bone, the latest in triggering, yet well-intentioned films about eating disorders, was released on July 14th amidst a fair amount of controversy. It’s become the talk du jour in the body image/eating disorder world, with some people applauding the writer/director for sharing a version of her personal struggle with anorexia, and others frustrated and disheartened that she would create a film including eating-disordered behaviors that will trigger vulnerable viewers.

My reaction falls in the latter category. Having dedicated the majority of my life to preventing eating disorders, this new film works against all we promote at The Body Positive. One of the first things we do to create safe space in our workshops is to let participants know that neither we, nor they, will be sharing specific details about their past or present eating disorder or dieting behaviors. For people vulnerable to body hatred and eating problems, detailed stories about eating disorders, even if the purpose is to convey their horrific nature, can have deleterious consequences, causing many to spiral further downward. Had I watched this film when I was suffering from bulimia as a teen and young adult, I would have been inspired to step up my pursuit of ultra-thinness.

In the movie, our dying protagonist is called “dazzling” and “gorgeous” by the one male character in the treatment center who happens to also be witty and charming. My young eating-disordered self would have been keenly aware of who held the power in the story, and would have doubled my efforts at weight loss to emulate her.

Starvation causes mental illness. People who can’t think rationally because their brains are not nourished are not going to be scared into recovery, especially by a movie that glorifies the complex disease of anorexia. They are also not going to have the wherewithal to avoid watching a movie because it may be triggering (an argument many have made in defense of the film). One only needs to draw on the film itself to be reminded of how common it is for people with eating disorders to find another sick person to put on a pedestal. Two people in the movie do this with our protagonist, who is a talented artist with a devoted fan base.

I had breakfast this past week with a dear friend who reminded me that her battle with anorexia began after watching an after school special about a girl with an eating disorder. Hers is an all-too-common story I have heard since I began my work to prevent eating disorders after the death of my sister Stephanie due to her war against her body.

Instead of teaching people about eating disorders’ signs and symptoms, at The Body Positive we center our programs on the active solutions people can make in their lives by providing them with the five Competencies of our Be Body Positive Model. We give every individual the space they need to share their suffering with eating problems (isolation, derailed educational pursuits, anger, sadness, etc.), but we refrain from obsessing on the problem, and we stop anyone from discussing the details of their disorder.

I believe our Competency of Cultivate Self-Love is one that resonates deeply with those who are healing from their eating and body image problems. When we talk to people who have been involved in Body Positive groups, one thing they generally mention is that self-love was key, even in its early stages, to helping them heal their relationship with their bodies.

There can be a lot of resistance, however, to the idea that self-love is our birthright and available to all, especially for those who have taken their self-criticism to the depth of an eating disorder. They believe that self-love means they have to love their body at all times, that there is some place of perfection one gets to with self-love that means critical voices disappear forever. Not so!

As I shared in my book Embody: Learning to Love Your Unique Body (and quiet that critical voice!), another reason people resist the idea of self-love is that they associate it with self-centeredness and narcissism. If you look up self-love in the Merriam-Webster online dictionary, you will find a definition that includes “conceit” and “regard for one’s own happiness or advantage.” How dare I say I love myself! I’m imperfect, for goodness sake, and should be self-deprecating. Having self-love is frowned upon in most social milieus, especially for women. We are supposed to put ourselves down in bizarre bonding rituals that diminish all involved and ensure that no one shines.

In my research while writing Embody, I came across philosopher Jean-Jacques Rousseau’s two definitions of self-love. The first, amour propre, is what is defined above. It has the negative associations many people think of, including hierarchy, comparison, and competition, qualities that are present in many female-centered social groups. We are trained to compete, which means constant comparison with others to see where we stand in the beauty hierarchy.

Amour de soi, however, is something all humans are born with, and is a trait necessary for self-preservation in all animals.

Rousseau describes it as a quality that leads to more humanity because it is not associated with self-interest, but rather individual wellbeing. Amour de soi takes away any need for comparison or competition. It allows humans to be aware of their valuable existence. It leads to closer and more real connections with others.

Amour de soi encompasses everything about a human being. It isn’t about loving your image every day. It doesn’t mean that every time you look in a mirror you’ll be happy with what you see. It’s more abstract and deeper than that. Having this type of self-love, which is a practice, means that during times of struggle, when you may not like yourself at all, there is still a deeper feeling you hold, a knowing that you still have purpose and value. Amour de soi is big enough to hold your self-criticism.

“I think self-love and self-acceptance have a lot to do with wellbeing. I feel like a lot of people, trying to reach their beauty ideals, don't realize how wonderful life is and how a change of perspective would give them everything they need to be happy. I'm so glad I had the opportunity to go to your Body Positive training and learn about amour de soi in high school.” —Malena, Psychology student, Rosario, Argentina

One of the highlights of sharing Rousseau’s definition of amour de soi in Embody was receiving an email from Malena, a young woman from Argentina who had been an exchange student at Drake High School in Marin County, where she was able to attend one of our Be Body Positive trainings. She wrote to tell me that she had already started sharing what it means to be body positive with all of her friends. She then mentioned how much she loved the concept of amour de soi and that she was thinking of getting a tattoo of the words. She did, as you can see from the photos! I can’t think of better words to have on one’s body than a definition of self-love that refers to the deep qualities of purpose and self-preservation.

It took me a long time to understand what true self-love meant. I got over my eating disorder and body hatred when I was in my early twenties, but it took until my forties to start being loving to myself. I used to beat myself up all the time for not getting things “right.” I was my harshest critic. Looking back, I see how much my lack of self-love hindered me in both my personal and professional development. It’s hard to take risks when we don’t have a safe place to come home to.

Self-love is still a practice for me, and will be until the day I leave this planet.

As my critical voice has quieted, however, I am aware of how much freedom I now have to live authentically, to be my true self in the majority of situations.

It is my desire to share the concept of amour de soi with people of all ages, and especially with those younger than me, with the hope that they, too, become free by understanding the incredible value they bring to the planet, simply as their “imperfect” human selves.

So I will continue with my wonderful team at The Body Positive to conduct our eating disorders prevention programs that bring self-love, and so much more, to the people who step into our world.

If you’re struggling with your body and/or food, instead of watching To the Bone and focusing on the problem, do something proactive, like reaching out to someone who can help you on your path to healing. We would be honored to have you join us for a Be Body Positive workshop or training. If you can’t get to us in person, stay tuned for information coming soon about our online and regional trainings.

Healing isn’t easy, and life beyond an eating disorder isn’t perfect by any means, but freedom to experience self-love feels incredible. We all deserve that freedom. 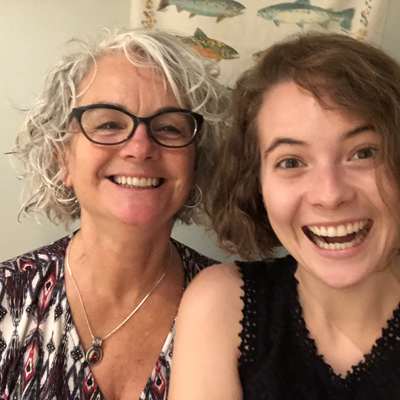 Connie Sobczak
Connie Sobczak, author of Embody and Co-Founder of The Body Positive, loves to watch the light and power that emerge when people recognize and embrace their magnificent, authentic selves.Her favorite pleasure activities include eating delicious meals, and rock climbing and running as fast as she can down mountains with her daughter Carmen. She gets true rest by getting lost in a good book. She is currently in love with The Plague of Doves, by Louise Erdrich, and The Lowland, by Jhumpa Lahiri.
Blog Home